Cucumbers in sour cream has been a favorite side dish for me since I was little. I love the mixture as is or (even better) in a sandwich. Of course, that was in my non-lowcarb days! 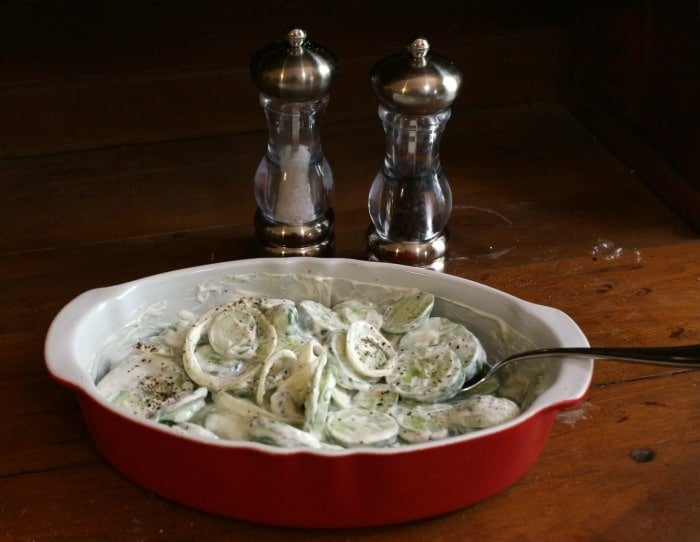 This year we planted a vegetable garden for the first time in a very long time. We had a flood several years ago and the flood water was six feet or more in some places. It laid down a thick layer of silt which was hard to work with. Shortly after that I started working and my time became non-existent. My husband either took pity on me or he was tired of hearing me complain about not having a garden and he built me beautiful raised beds and had good soil delivered to fill them with. 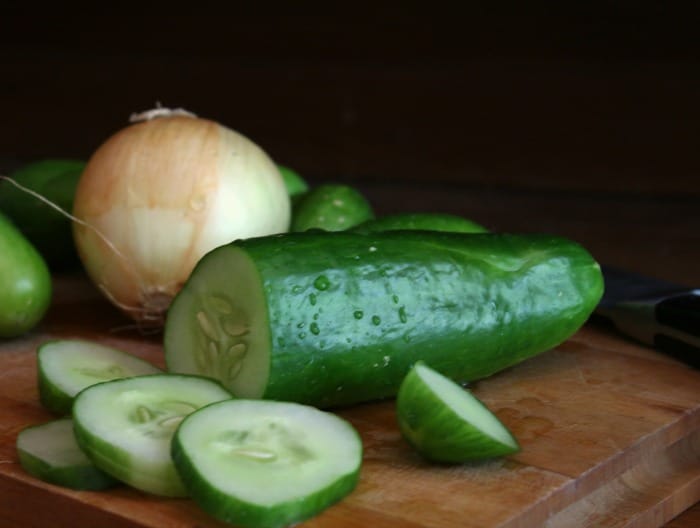 My mom always made it with sour cream and sugar with just enough vinegar to give it some bite. The trick to the flavor is letting the cucumbers marinate in the mixture for several hours – even overnight. The other tip is to put plenty of cracked black pepper on them.

Cucumbers are pretty low carb. One cup has 3.8 carbs and just 16 calories but it has a significant amount of vitamin C and iron. When I am using homegrown cucumbers I’ll leave the skin on but if you are getting them from the store, especially if the skin in waxy, peel them. Sometimes, especially when it gets really hot and dry, the skin gets bitter and you’ll want to peel them then, too.

Red onion is great in this but I like to use mild 1040s or Vidalias. I like the visual coolness of the creamy white and green colors without and pops of bright color. The cooling texture and refreshing flavor is perfect with grilled meats or anything spicy. I’ll tell you – I love cucumbers in sour cream alone just as a quick light lunch or dinner on those 110F days we get here in Texas.

Slice the cucumbers on the thin side but not paper thin. You don’t want them to disintegrate in the sour cream – just get yummier. 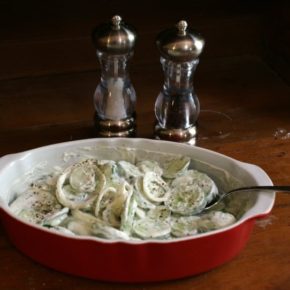 A cool, creamy side dish that is fabulous with grilled meats. Cucumbers, onions, and sour cream are the main ingredients and you can throw it together quickly. Just be sure to make it at least 4 hours ahead of time! Add a little fresh dill or basil if you like. This is sure to be a summertime favorite.
Course Appetizer, Side Dish
Cuisine American - low -carb
Keyword cucumber, sour cream
Prep Time 10 minutes
Total Time 10 minutes
Servings 8 servings
Calories 55kcal
Author Katherine Peters