These low carb cinnamon crepes have 2 carbs and are fine for an egg fast. Perfectly sweet and satisfying when you don’t think you can look at another egg. Ever.

?If you are in a hurry click here to go straight to the recipe. 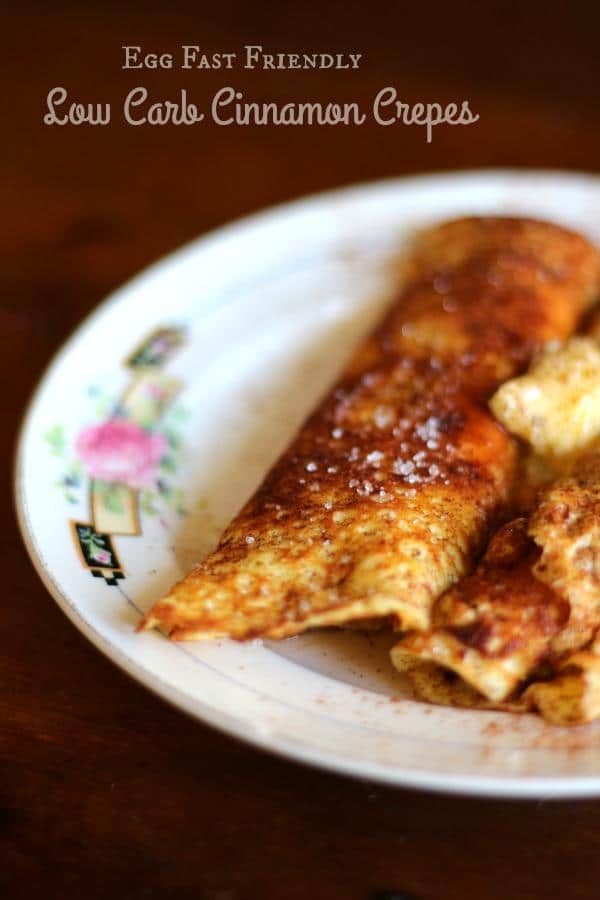 I found out last week that my husband is taking me to France for my birthday in April. This has been a dream of mine since I was in third grade and I am so excited I can’t stand it. Paris, Normandy, Bayeaux (tapestry anyone?), Loire Valley… So many places I’ve dreamed about for so very long. This does, however, create a stress point. I leave for Paris in less than 90 days and I still have some weight I want to lose AND thanks to the holidays I have been in a major stall.
Boo.
I’ve been on egg fasts before and I know they work better for me than a fat fast. I knew that it was time to get in the right frame of mind and just do it. Planning it is actually worse than doing it because once you start you aren’t hungry or craving anything and it really doesn’t have to be boring. I promise.
So, you can expect egg fast friendly recipes here for the next several days because that’s what I’ll be cooking. It’s ok if you aren’t on an egg fast — these recipes work fine for any of the stages of low carb eating.

Be careful of sweeteners. Some people have problems with some sweeteners. If you know that erythritol stalls you use something that doesn’t. It’s just that easy.

I leave the top of the crepe creamy and roll it once the bottom is set and golden. If you want it dryer just flip it and cook for a minute or two in on the other side. Before you do that, try one that is creamy on top — it’s just so good! The images show two crepes but the recipe makes three. I was starving so I ate the first one before I took pictures.

The following are affiliate links. If you click through and buy something I’ll get a small commission used to keep the blog up and running. Thanks so much for being a part of Lowcarb-ology!
Here are some of the ingredients and items that will be helpful in making this low carb cinnamon crepes recipe. You’ll need a heavy omelette pan so that it heats evenly without sticking or scorching the crepes in random spots. I like erythritol for these because it has big crystals and I like the texture and look of it sprinkled over top of the crepes.
Torani Sugar Free French Vanilla
Erythritol
Calphalon Omelette Pan 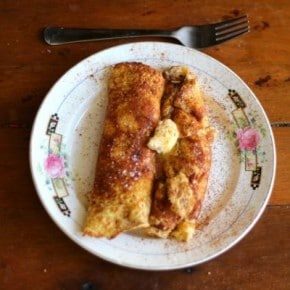 15 thoughts on “Low Carb Cinnamon Crepes for an Egg Fast”