Low-carb sage stuffing recipe is one way to enjoy Thanksgiving or Christmas without going off your low-carb diet and setting yourself back. With just under 5 carbs per serving you can eat your fill. 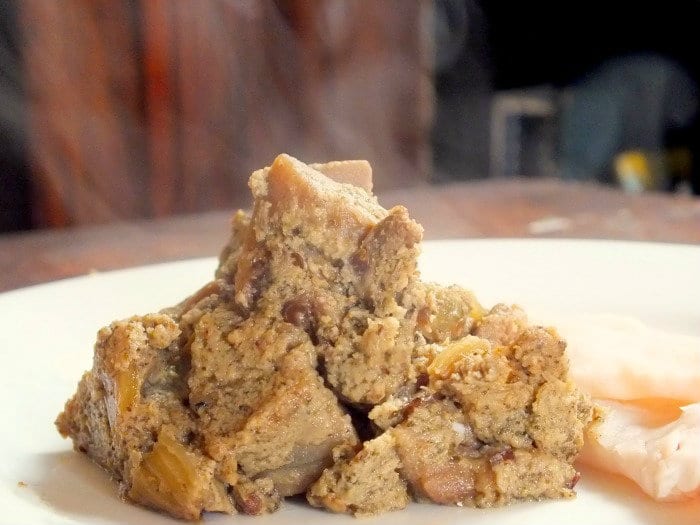 The secret is in switching eggplant for the bread. Eggplant, like cauliflower and zucchini, is primarily without any real flavor of its own so it takes on the seasonings you add to it. It is also delightfully “bready” when it is baked. The final product is a bready, stick-together side dish that has deep flavor from chicken broth, onion, celery, and sage?? just like the real thing. You could, technically, use this to stuff the bird but it is safer and easier to bake it in a covered casserole dish.

It works with the turkey, gravy, cranberry sauce (oh yes, I have an upcoming, low-carb recipe for that!) and those low-carb sweet potatoes. You won’t be looking at someone else’s plate and drooling, for sure.

My favorite part of Thanksgiving was walking into the kitchen a few days before and seeing slices of bread lying all over the counters drying out a little. I always knew that Thanksgiving was near. The day before my dad would sit at the kitchen table and tear small, uneven pieces of bread with his big hands. They’d all go into a giant bowl and then mom would add celery, onion, sage, turkey broth, and salt. The way she just added everything in without measuring was magical to me. To this day I cannot replicate the flavor in that stuffing. I wish I could.

You can make this up to three days ahead of time and keep it covered tightly and refrigerated. Just warm it up at about 350F for 20 minutes or so.

Be careful with the salt. While I was working on developing this recipe I inadvertently over-salted it. I’d suggest that you finish cooking it and then add salt to taste before baking. Be stingy with it, though.

The texture comes from the combination of cubed eggplant and pureed eggplant. Once it is baked it mimics how bread stuffing is chewy and creamy all at the same time. 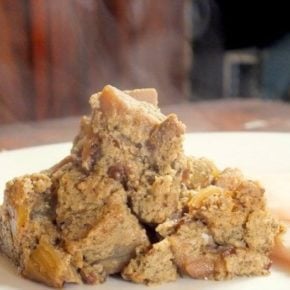 Make this up to three days ahead of time and refrigerate

Elsewhere on the Web